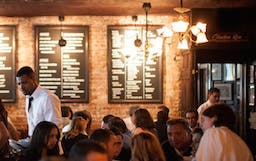 First of all, we’ve been watching a lot of Mad Men, and P.J. Clarke’s is one of the few places in town that still feels like a relic from that era. If you want to get your Roger Sterling on, there is hardly a better place to do it. Show producers even wrote the restaurant into an episode as the setting for a scene in Season 1.

Second, we recently read an article in another publication stating that only recently has New York become a good burger town, now that Pat LaFrieda owns the city and Shake Shack has adopted Chipotle’s expansion plan. We’d like to disagree. P.J. Clarke’s has been rocking a good burger for decades, as have some other NYC classics like Old Town Bar and J.G. Melon. Let’s give the elders some credit.

The only thing we don’t like about P.J. Clarke’s is that it’s almost always insufferably busy. Most of the time the after work crowd is so big that it spills out onto the streets, and the tourist traffic on weekends can make it tough to get a seat.

A classic raw bar with oysters, clams, and some shrimp cocktail. A few drinks and some oysters at the bar are always a good idea, assuming you can actually get to it.

A solid crab cake that can be a nice starter for the table. In an era when pork buns and brussels sprouts seem to be on every menu, and old school appetizer is nice.

The gold standard at P.J. Clarkes, this is their burger with bacon and cheese. The bacon is cooked perfectly, as is the burger, and it’s tasty and satisfying, even if a little on the small side. They recently revamped this guy with a new meat grind and bun, which the jury is still out on for us. We fear change.

If you only come to P.J. Clarke’s to eat fries and drink, you’ll walk away happy. These are crispy, salty, and perfect, and should be on your table no matter what.

Just as tasty as the full size burger, and served with bubble and squeak, which is apparently not a cartoon rat family.

So much lobster roll talk lately. Unfortunately, we felt it our duty to weigh in on P.J. Clarke’s, which is somehow boring and a bit too chewy. 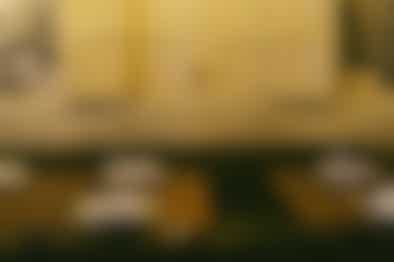 Socarrat Paella Bar is a Spanish restaurant in Midtown East that works for a group dinner.

Bukhara Grill is an Indian restaurant in Midtown East that makes some of the best dal in the city. 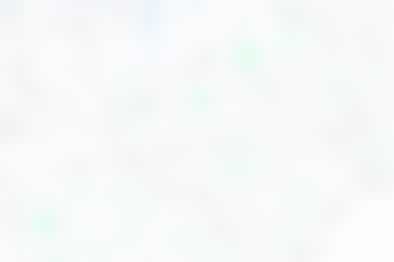 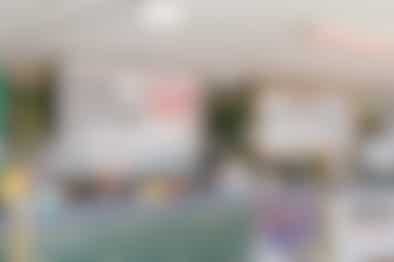 High 97 is a concession stand with burgers and fried fish at Beach 97th Street in Rockaway Beach.

There’s something about pounding cheap beers and burgers here that makes you feel like anything is possible. When we finally decided it was go time for “Immaculate” Infatuation, we were sitting in Corner Bistro. A great burger, and a classic establishment.

The New York experience is really about making this gigantic metropolis feel smaller. Viand is one of those places.
Restaurant Finder