July 6, 2020
Old Greg’s: The New Pizza Pop-Up That’s Already Sold Out For A Month
Everything you need to know about Old Greg’s, Miami’s new pizza pop-up.

So there’s good news and bad news. Let’s start with the good: Old Greg’s, maker of the square pizza you may have seen somewhere on the internet over the last five months, finally has a space. They started doing take-out-only service this past Fourth of July weekend from the Design District. The bad news? They sold out for the entire month in about 15 minutes.

That’s pretty nuts for Miami, a city that usually reserves that level of enthusiasm for things like free drinks or spotting Trick Daddy at a red light. We know you might have some questions about all of this, so let’s unpack it together.

What exactly is Old Greg’s?

Old Greg’s is a pizza pop-up run by a local chef, and (after months of anticipation) they finally got a space to sell their pizzas this past weekend. They’re temporarily operating out of Kaido.

Yes. Old Greg is a swamp monster popularized by the British comedy troupe known as the Mighty Boosh. He really likes Baileys, the Irish cream liqueur. It was definitely a thing that someone at your high school quoted for a solid three weeks. Apparently it’s what the chef (also named Greg) calls his sourdough starter.

Why are people so worked up about this pizza?

It’s a square pie (a rare thing in Miami) with a sourdough crust that’s thick yet fluffy. Toppings are fresh and evenly distributed, and the edges (if warmed up in the oven properly) are nice and crispy. All the hullabaloo is probably a combination of genuine excitement over having a great new pizza option in town and the numbing boredom of quarantine.

Am I ever going to be able to actually order some?

Yes, eventually, if you stay glued to their Instagram page and have your credit card information memorized for when they announce the next round of orders. Old Greg’s says they’ve already increased the number of pizzas they’re serving per day and will be taking more orders every Wednesday at 1pm. Plus, even if the pizza is sold out, you can still order other menu items like polenta crusted wings, garlic knots, and frozen mezcal negronis. Or you could just stand around the Design District with a $100 and try to bribe anyone carrying a pizza box.

Where can I get pizza from in the meantime?

You can also get your square pizza fix over at Square Pie City. It’s not totally the same - they serve a Detroit-style pizza, which is a much denser style, but we can confirm it’s good too. They’re serving from Babe’s Meat & Counter on Fridays and Wynwood’s J. Wakefield on Saturdays. You can pre-order online. We also have a pizza delivery guide in case reading a 400-word article about pizza has made you really want pizza tonight.

What did you order?

Excellent question. Please direct your attention to the food rundown below. 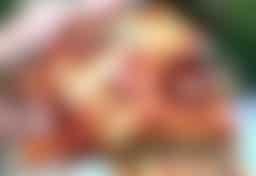 Where To Go In Wynwood If You’re Sick Of Wynwood
Wynwood can be overwhelming, but here are some casual places where you can actually have a conversation.

The Best Bakeries In Miami
If you love bread, you’ve come to the right guide.

Not All South Beach Restaurants Suck
But even the good ones trapped in the “entertainment district” are suffering the consequences of Spring Break.

Where To Find Birria Tacos In Miami
In case all this talk about birria tacos is making you hungry.