It’s never a bad time for a burger - and these 11 are the best new ones in Los Angeles.

From a parking lot pop-up in East Hollywood to a Historic Filipinotown bakery selling burgers for breakfast, 2020 has been a remarkably good stretch for new burgers in LA - and that’s the nicest thing we’ll ever say about this godforsaken year.

And in keeping with that spirit of positivity - and since it’s been a minute since we updated our Best Burgers In LA list - we decided to shine a spotlight on some of those new options. Because there’s no bad time for a burger. So put down that grocery store patty you’ve been picking at all week and go try one of these 11 fantastic spots instead.

Everything you need to enjoy some semblance of summer. 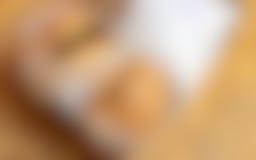 First off, Amboy has the best fries in Los Angeles. Period. Golden and crispy, skinny (but not too skinny), and served with every order - they’re Goldilocks-levels of just right. And the burgers at this new Chinatown spot are pretty stellar, too. We recommend the classic double, with a pair of perfectly smashed patties, a toasted sesame bun, cheese, and a slew of pickles, which add just a little touch of acidity. Of course, it also comes with that In-N-Out-style sauce that every burger in LA seems to come with these days, but Amboy is judicious with their spread, and doesn’t overdo it. Amboy is also a butcher shop, so if you’ve got a bigger appetite (and plenty of napkins), try the DH, with a fantastic dry-aged beef blend patty and garlic confit mayo. 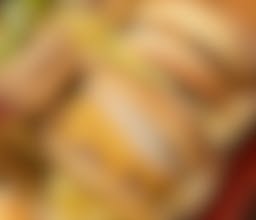 This retro burger spot on La Brea was unlucky enough to open just a few weeks before March’s stay-at-home order began, so even though they’ve been around for several months, chances are you haven’t stopped by. That needs to change. For one, they run an efficient contactless pick-up operation, and secondly, the burgers are excellent. Your eyes (and stomach) are no doubt going to go for the classic double cheeseburger first, but for us, the American is the best burger on the menu. This simple, $6 burger is topped with only with American cheese, diced onions, pickles, ketchup, and mustard, and is essentially their take on the Quarter Pounder - but a vast improvement upon the original. Also, be sure to get some fries as well. They’re thick, crispy, and perfect for dipping in whatever you shake you ordered. 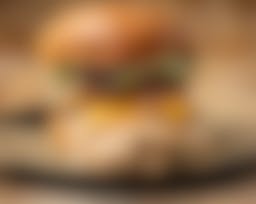 We’re just going to come out and say it - one of the best things about Clark Street’s burger is that it’s available at 7:30am. Have we actually ordered it that early? We’ll never tell (yes, and many times). Plus, since this is a fantastic bakery, the hamburger bun it comes on is equally impeccable - soft, thick, and shaped like a sesame-seeded cloud, unlike most hamburger buns, it doesn’t feel like an afterthought, but rather a complement to the burger. The third-pound of meat is well-cooked. There’s a little bit of special sauce, but not too much. They even throw in a slice of heirloom tomato, which is cool. And again, you can order it at 7:30am. 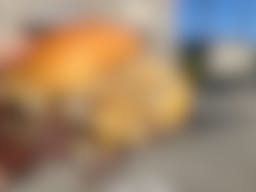 Smashburgers have become immensely popular in LA over the last few years, so much so that it’s hard to know which spots are actually worth checking out. We’ll make this very clear then - go to Easy Street. Right now. The tiny pop-up in an empty parking lot along Western Ave. in East Hollywood is cooking up one of the best versions we’ve ever had in town. Greasy, but-not-too-greasy, crispy, but never burnt, Easy Street is exactly what a smashburger should be. You should absolutely add some chopped grilled onions on top for $1, and keep in mind the patties are thin, so a double should be your minimum order. The fries are admittedly just OK, so if you come hungry, plan to just order two burgers instead. 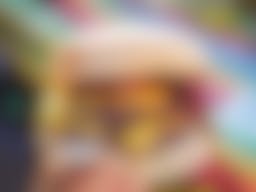 No, you’re not experiencing deja vu - this smashburger pop-up used to operate out of the old Haché space in Silver Lake. And although that stint only lasted a few months, they were one of our favorite spots in town for a simple, surprisingly juicy patty. Now they’re back (this time in Highland Park), and we’re happy to report that much like our 12-year crush on Dev Patel, not much has changed. Made-to-order with grilled onions, pickles, and a slight smothering of garlic aioli, these hefty patties remain a standout in an oversaturated smashburger market. The only difference? Goldburger now also sells pies - which, much like a pair of clear, perfectly fitted frames on Dev Patel’s beautiful, perfect face - is a much-welcomed addition. 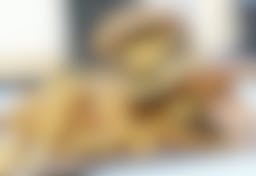 Heavy Handed, the Sunday-only pop-up in West LA, has mastered the double burger in a way that few places have. The cheese/meat/bread ratio is perfect - every inch of the smashed patties is covered in melted American cheese, and it’s served on a fluffy Martin’s potato roll. The burger, made from 100% short rib, also has some sweetness from the house bread-and-butter pickles, and tang from the house burger sauce, which complement the funky patty perfectly. And if you don’t get an order of their beef tallow fries on the side, you’ll never forgive yourself. 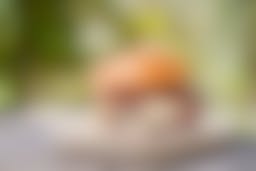 Pastrami’s the star of the show at the new (old) Johnny’s West Adams, the recently revived late-night spot that served towering, sliced-meat sandwiches for nearly 60 years before shutting down in 2015. So it should come as no surprise that their new (old) burger piles on the pastrami as well. The Johnny Burger features a crispy patty that’s doused in Thousand Island dressing and mustard, covered with caramelized onions and Swiss cheese, and, of course, smoky, slightly fatty pastrami. Is it delicious? Definitely. Is it overkill? Probably. Does it feel weird to spend an afternoon stuffing your face with a burger built to be destroyed very late at night, when you are very drunk? Depends - did you get a single, or a double? 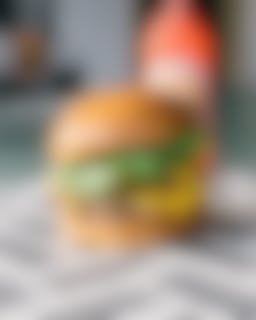 NoMoo is an all-vegan burger spot that opened in the original Johnny Rockets (major RIP) space on Melrose. There’s only one burger on the menu, but it’s very good. A large Impossible patty (get the double if you’re really hungry) topped with vegan cheese, their slightly-sweet special sauce, lettuce, pickles, and onion, all on a warm brioche bun - it’s a great meatless option to keep in mind if you’re wandering Melrose on the weekend.

The burger at Papilles is what we call a “Five Napkin” burger - big, messy, and the kind you definitely don’t want to be eating while wearing nice clothes. Crispy, quarter-pound patties topped with onions, pickles, and doused in their Thousand Island-ish special sauce... it’s essentially a fancier, better version of the Double-Double, and that’s certainly not an indictment of In-N-Out. It’s praise for how good this version tastes. 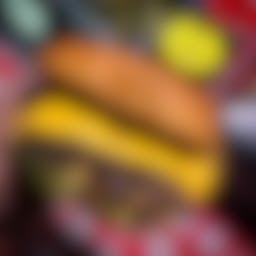 OK, so they’ve technically been open for nearly a year now, and in that time, Tripp Burgers has built a loyal following (we have the emails from readers to attest to this). The secret? Well, it’s easy to say “simplicity” - Tripp does thin-and-crispy cheeseburgers, and does them very well - but the secret may very well be the patties themselves. They’re a mix of prime chuck, top sirloin, and bacon (!), which gives the burgers a subtle, smoky flavor that sets them apart from most of the field. Maximizing their minimal pop-up space, Tripp also griddles burgers with sweet onions, and orders can range from a simple single to a borderline-insane four stack, but we prefer to taste the beef itself, so we stick with a tried-and-true double. For locations and hours, check their Instagram. 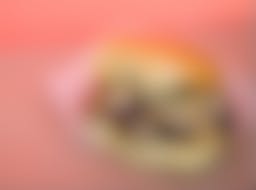 The Win-Dow at American Beauty

Venice steakhouse American Beauty had their pick-up window (er, Win-Dow) up and running pre-pandemic, a move that looks pretty prescient now. They’re doing straightforward, no-frills burgers - grilled on a flat-top with onions, topped with American cheese, pickles and house sauce, and served on a Martin’s potato roll - so it’s smart that they don’t mess with the formula. The burger is crispy yet juicy (and a touch salty, which is OK by us), the cheese sufficiently gooey, and the house sauce is slightly tangy, but they do innovate a bit, too: Not only do they make a great breakfast burger with egg, but their vegetarian Beauty Burger, made with an Impossible patty and grilled with onions, is one of the best in the city. 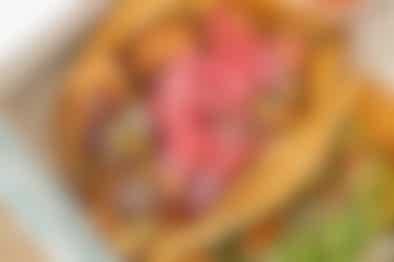 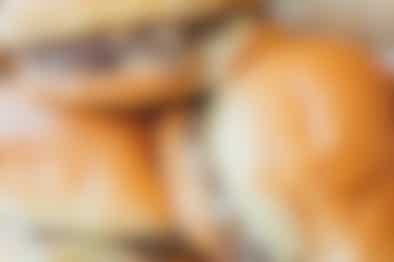 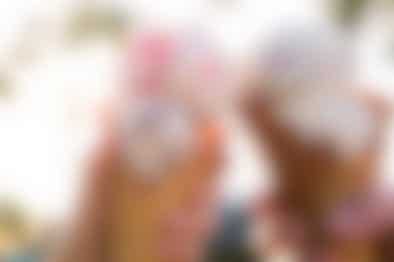 The 25 best places to get ice cream in Los Angeles. 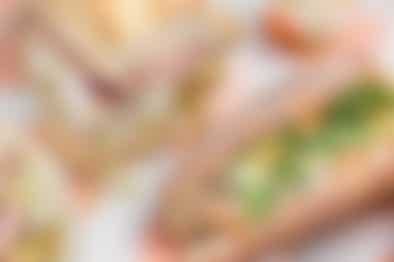 30 spots across the city offering fantastic sandwiches for takeout or delivery. 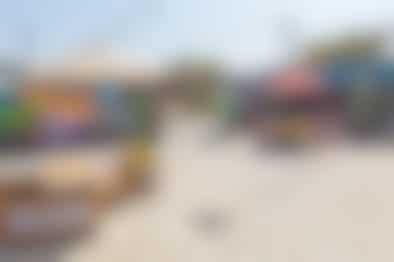 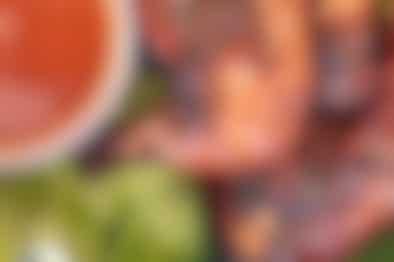