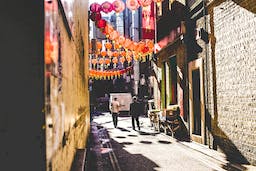 February 18, 2021
Dumpling Shack Highlights Attacks On The ESEA Community, Here’s How You Can Help
After a slew of online comments, as well as events in the USA, the restaurant group has posted to Instagram to raise awareness of ESEA discrimination.

Following a series of racist and vitriolic comments underneath a Facebook video posted by Prime Minister Boris Johnson celebrating the Lunar New Year, the Dumpling Shack restaurant group took to Instagram to highlight the continuing discrimination that the East and Southeast Asian (ESEA) communities continue to suffer, both in the UK and further afield. In the caption of their post, Dumpling Shack asks:

”if a large number of people have these views towards the Chinese does that mean we’re not part of this society or we are and this is something we just have to accept, it’s the cross we have to bear for being Chinese?“.

The official figures are shocking. By May last year, racist abuse towards ESEA communities has risen by more than 400%, and an increase in hate crimes has been recorded by both the Metropolitan Police and the British Transport Police compared to figures from 2019.

This is coupled with a rise in unprovoked physical hate crimes against Asian-Americans across numerous cities in the USA, including the death of a man in San Francisco after a racially-motivated attack. Earlier this year, President Joe Biden signed a memorandum condemning the Trump administration’s role in fuelling xenophobic rhetoric.

Restaurants, and Chinatown in particular, have also been affected by the racist tropes surrounding coronavirus. Particularly when it comes to footfall and finances. In an article for Eater London, a dim sum chef on Lisle Street is quoted as saying “In the 30 years I’ve worked here in central London I’ve never seen Chinatown so dead, it’s scary.” Young Cheng, a Cantonese buffet spot, and Hung’s - a true London institution - have permanently closed since the start of the pandemic.

The Huffington Post: Race Hate Crimes Against East And Southeast Asian People Have Quadrupled In Wake Of Coronavirus

34 New Restaurant Openings That You Can Book Right Now
What happened to all those restaurants that opened during the pandemic? They’re open for bookings from April 12th, that’s what.

How To Secure A Seat At London’s Best Restaurants
Restaurants are booking out quick, but prepare for al fresco freedom with Staff Writer Heidi Lauth Beasley’s tips on securing a reservation.

6 Restaurants With Outdoor Seating For That Long-Awaited Date Night
London’s most romantic courtyards, gardens, and outside set-ups.

Was It Love Or Was It Lockdown?
Where to go when you need to figure out if your feelings can exist outside of a global pandemic.