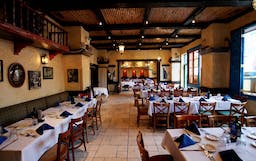 Deciding on a restaurant in Greektown is as difficult as picking your favorite ancient Greek god. Or not. Maybe you don't know sh*t about Greek mythology. And if that's the case, let us be your Athena and lead the way.

If your goal is a familiar and comfortable Greek dinner with no surprises, then longstanding Greek Islands is the spot. We concede Greek Islands doesn't always have the best food. Sometimes the meat isn’t as flavorful as we’d like, and sometimes things aren’t as fresh as they ought to be. But we tend to forgive them for two reasons. One, the Americanized Greek staples are good. Two, it's a great place to sit, converse, and hang, no matter who you're with.

The menu is so massive there's a chance Homer himself wrote it, and you can load up on gyro meat, grape leaves, saganaki, moussaka, and more. The wine is also relatively cheap, and unless you're a wine snob, you’ll be perfectly content paying for a bottle or six.

Greek Islands also has that cheesy, albeit typical and perfectly acceptable Greek restaurant look. You know what we’re talking about. Fake cobblestone floors made of tile, Parthenon-esque decorations, and everything blue and white in the tradition of the Greek flag. It’s all a little overboard, but the polite, efficient, and mostly Greek staff pulls it off.

So if you’re looking for comfort food in a place that hits all the basic Greektown notes, Greek Islands is a solid choice. Not the only choice, but a respectable one.

Also known as chicken lemon rice soup. It’s good, but this version is on the creamier side, so something to keep in mind.

A blend of cod roe with potatoes, onions, and olive oil. They call this “Greek cavair," which is a bit of a stretch, but we get the idea. It's not quite on the caviar level, but it's fishy, salty, and best spread on pita.

Nine times out of ten we end up at Greek Islands because we’re in the mood for saganaki. We order it the other 10% of the time too.

Grape leaves stuffed with ground meat and rice, topped with an egg-lemon sauce. Always reliable, always good, and one of our usual orders.

Layered filo stuffed with spinach and feta. When it’s fresh, we are big fans of the spinach, feta, and filo mix. The problem is it seems to be hit or miss.

Standard, tasty, and comforting. You can get it as an appetizer, which is rather large, or make it a meal that’s even larger.

We aren’t into the lamb. It’s often dry and tasteless. There are plenty of better options on the menu.

Ēma is a small plates Mediterranean restaurant in River North, and it’s good for a lot of occasions.

Chicken Kalamata and crack fries is one of the best meals in town. Tina Fey agrees.
Restaurant Finder