We’re always looking to make The Infatuation the best platform to find restaurants, and we appreciate your feedback!
All

Jack X. Li
May 24, 2021
My Mom’s Red-Braised Pork Trotters Are The Only Reason I’m Not Vegan
Plus, 6 places in NYC, LA, and Chicago to try my favorite Chinese dish from childhood.

Growing up in Kaohsiung, in southern Taiwan, my mom fondly remembers eating her favorite dish on her birthday - red-braised pork trotters. These pig’s feet have an amber hue from the soy sauce and caramelized rock sugar that they’re slowly cooked in and my mom says her lips would always get stuck together when nibbling the juicy skin off the bone. My grandfather, a naval officer who fought against the Communists during the Chinese Civil War, was also a poet and excellent cook. He would frequently braise pork trotters with hard-boiled eggs and bean curd, a recipe my mom also perfected once she moved to the United States.

Like my mom, I adored pork trotters as a kid. They were just the right balance of sweet and savory, and my eyes would light up when I came home from school and recognized the familiar scent of sweet soy mingling with garlic, ginger, and scallions that could only mean one thing: pork trotters for dinner. 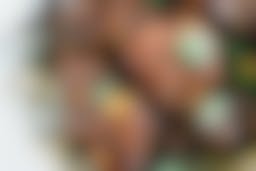 Only as an adult could I fully appreciate the arduous process required to make my favorite dish. My mom purchased pork trotters already cut in half from the Asian supermarket, but it would take her more than an hour just to tweeze off all the hairs. Trotters are notoriously difficult to clean and the detailed work would make her eyes sore, but my mom used cooking as a way to express her love, and selflessly plucked away for my brother and I. Once the trotters were smooth and clean, it would take two more hours to slowly braise them and reduce the sauce down to the same consistency and color as a 30-year-aged balsamic vinegar.

My brother and I gleefully gnawed on these trotters, making a sticky mess of our fingers and faces. This was a dish we enjoyed among ourselves, not something to be served when white friends came over to work on school projects. They would invariably be grossed out, scrunching their noses in revulsion at the thought of eating feet. Instead, when friends came over she would make a predictable crowd-pleaser like fried rice. My friends praised my mom’s cooking, but only my brother and I knew how good her food truly was.

These days I eat a mostly plant-based diet with my boyfriend, who is vegan, but my one exception is still my mom’s succulent pork trotters. While I won’t be sharing mine the next time my mom makes them, pork trotters are a common ingredient across Asia - from China to Japan, Thailand, and Taiwan. And as such, there are lots of great restaurants that serve them. Here are six of my favorites places to eat pork trotters in Chicago, New York, and LA.

This excellent Chinese restaurant in Bridgeport specializes in Sichuan cuisine and offers both a spicy and non-spicy version of pig’s feet to try depending on your tolerance. There’s a white-braised Chengdu pig’s foot soup that’s mildly flavored with scallions, ginger, and garlic, and comes with four or five heaping hunks of trotter per bowl. There’s also a bolder, spicier Chengdu glazed pork feet with peanuts, which is most similar to the way my grandfather, who was also from Sichuan, made this dish. I usually prefer the spicier version, accompanied by iced peach oolong tea to temper the spice. 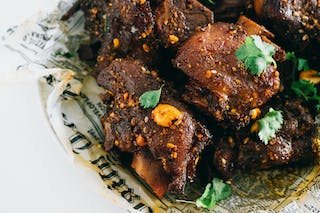 Pork trotters are also served in two very different ways at Le Sia in Hell’s Kitchen. Beijing-style is dry red-braised with soy, rock sugar, cloves, peppercorns, allspice, and star anise, with a similar flavor to how my mom makes it. The trotters are then grilled with chili seasoning powder, cumin, coriander seeds, and black pepper. The second preparation is wok-fried spicy hog hoof jelly, made with deboned trotters. They’re boiled for an hour, then deboned, diced into cubes, and wok-fried with ginger, scallion, garlic, black bean, and Sichuan millet pepper. Both fantastic, although the hog hoof jelly is quite spicy. 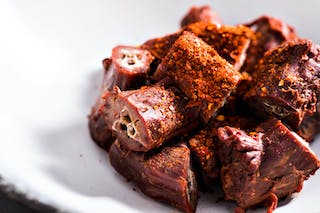 Although they aren’t braised, the pork trotters at Kimura are legendary and the collagen nabe (pork trotters are full of collagen, the skin-boosting superfood du jour) is worth a special trip. It’s one of their most popular dishes, and my personal favorite, at this Japanese hotpot restaurant on St. Mark’s. Here, pig trotters are stewed for more than eight hours to create a rich, almost milky soup base and trotters as soft as jelly.

The pork trotters at Hunan Slurp in the East Village are carefully de-boned and braised with a house marinade including Maotai Baijiu, a high-end Chinese liquor distilled in Guizhou province, which helps to reduce fat and produce a special mellow aroma. Paired with thinly sliced green chili peppers, this regional dish is widely enjoyed in Hunan.

This San Gabriel staple specializes in Taiwanese comfort food, including porridge and simmered pork trotters in savory soy sauce. The setup is cafeteria buffet-style, but the food is always fresh - the glistening trotters stick to your lips just like my mom remembers from her childhood. 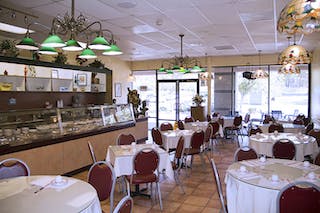 As you might expect from the name, the stir-fried pork trotters here are plenty spicy, tossed with heaps of fresh pepper, dry chili, and sesame. These hefty trotters from the pig’s forelegs have more meat than most and are a little greasy in the best way possible. This Santa Monica spot also serves a wide variety of offal, including intestines, kidneys, and ears, the last of which comes sprinkled with dry chili powder and I like almost as much as the trotters.